Taxes are a necessary evil. They are the cost of running our government.  However, raising taxes too much ultimately reduces the total value received.  Many economists believe the paradox that the more you tax, after a certain point, the less total revenue you collect thus reaching a tipping point.  Legislators should consider “How many taxes are too many; have we reached a tipping point; when do more taxes create diminishing returns and result in lower total tax revenues? ”.

Data strongly suggests Connecticut has reached or exceeded a tax tipping point after enacting historically high back to back tax increases in 2011 and 2015. This resulted in flat total tax revenues from 2013 to 2015.  In 2016 revenue actually fell 1.9%.

Many Connecticut residents are fleeing to states that are embracing the concept that if you tax less you will attract new taxpayers and thereby revenues. These states face the same daunting task of providing public safety, education, transportation and social services; however, they have chosen to reduce tax rates to stimulate their economies and have successfully increased their total tax revenues. 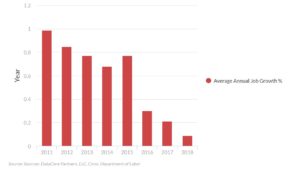 Connecticut, with a top income tax rate of nearly 7%, has had zero % population increase from 2010-2018 and flat revenue growth from 2013-2016.  Alarmingly, its job growth rate has dropped nearly every year since 2011 and is rapidly decelerating. Connecticut remains the only state in the Northeast that has yet to recover jobs lost in the last recession.

Lawmakers should consider that other historic tax increases stalled economic recovery, reduced revenues and lowered property values as people and jobs left.  Homes values are down by nearly 50% in Fairfield County.  Once the tipping point is reached, further taxation will accelerate a downward spiral.

Since the 2018 election, the tax floodgates have opened. A new progressive caucus has set its eyes on businesses and the highest income taxpayers who already carry the lion’s share of the tax burden.

The new administration and legislators should follow the example of growing states that are reducing taxes, not increasing them.  This is a proven way to grow the tax base and generate the revenues needed to fund essential services such as public safety, education, transportation and social services.  Connecticut needs to breathe life back into its economy and tip the scales back in favor of prosperity.

Toni Boucher is a Connecticut Businesswoman and former Senate Vice Chairman of the Finance, Revenue and Bonding Committee of the Legislature

Sources: The Tax Foundations, Foundation of Tax Administrators, US Census