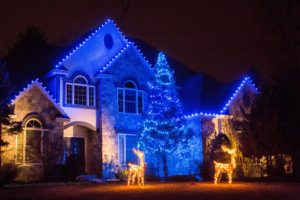 During this time of the year our neighborhood is aglow for the holidays. My next-door neighbors were famous for illuminating every one of their shrubs and trees for Christmas with several alighted deer figures adorning their front lawn.

This year their lights are out, and all is dark. No longer do their children’s sweet young faces show up at my door asking for home baked cookies that I so loved to hand them. Like many of my other neighbors, their parents made the hard decision to pull up stakes and take their family to a less expensive state to live and do business. They left behind family, schools, friends and a thriving business.

It is incredibly sad that too many people do not connect the dots. In a desire to vote a president out of office, they voted themselves out of the state instead. As a result, an imbalance of political power has been created in the state legislature.

An imbalance in Connecticut’s government has existed before, however.  Former Republican Governor Rell wrote “Connecticut has been under a one-party rule — not the balanced two-party system our founders intended. This administration, along with a Democratically-controlled legislature, enacted the largest retroactive tax increases in Connecticut history — tax increases that have put a brake on the economy. The overall impact of these policies is that jobs and people are leaving the state. Many people can’t find work and many who have jobs can no longer afford to live in Connecticut.” Sound familiar?
One party is, once again, in firm control of every state-wide office as well as the State House and Senate. State union leadership and their special interests dominate nearly every decision. Those decisions include: tolls; school / town regionalization; corporate and individual income tax surcharges; extra charges on utility bills; increases in state union benefits; and, dangerously underfunding their pensions. There have also been hidden fees and charges on small businesses enacted such as a $ 15 minimum wage that increases on a yearly basis and a new payroll tax for the most expansive and expensive new family leave plan in the country.

Connecticut’s economy, like all economies, is an ecosystem, i.e. all the parts are connected. You can’t do anything to one part without affecting the whole system. An ecosystem strives to remain in equilibrium and will react to every outside force that tries to disrupt it. These concepts are simple and basic truths; however, they seem to escape many legislators. They continue to enact legislation, policies and regulations that upset a once strong, vibrant and creative economy. No wonder that 47% of CT residents say they would leave the state if they could and our property values and school enrollments have plummeted.

My business travels take me across the country. A record 158,510,000 Americans are now working and the payroll taxes from people who work help support programs for those that cannot. I see this in the construction cranes, new developments, rail lines and new nonprofits popping up everywhere. It is a sign of a surging economy. It is even more obvious in states such as Georgia, Tennessee, Florida and Texas that have very low taxes and business costs. Unfortunately, Connecticut’s workers are flocking to those low cost states that have much higher job opportunities.

A balance of power is a good thing and we need to restore that balance to move ahead like the rest of America. (“A strong two party system is needed for checks and balances” Hearst Newspapers 9/19/2019) It was a balanced tied vote in the state senate that required the legislature to adopted new budget rules in late 2017 designed to force better savings habits. For example, a “volatility adjustment” system bars legislators and governors from spending a portion of income tax receipts tied to capital gains after those revenues top a threshold level. This is the reason that the state has a healthy balance in its Rainy Fund.

In this holy season of rebirth, it is my hope that balance will be restored in the year ahead, and the lights will shine more brightly in our neighborhoods and our beautiful state.

We never know what is around the corner or what new obstacles will need to be overcome but overcome them we will- with your engagement, involvement and faith.  Best wishes for good health, good will and good cheer!